How To Easily Inspect Your Own Deck 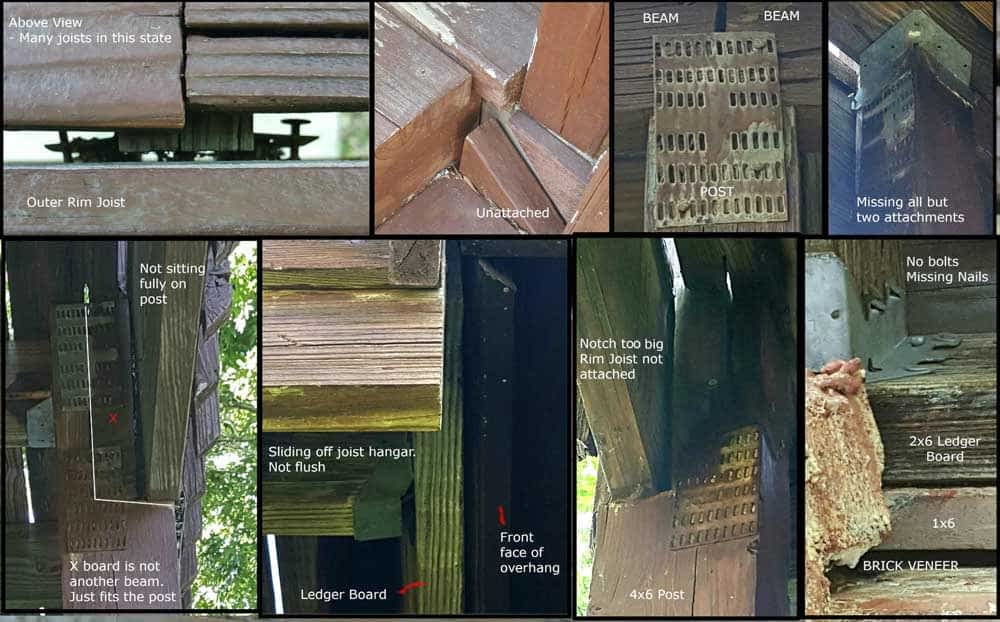 Inspecting your own deck might seem like a daunting task designated only for professionals. Rest assured we will show you how to easily inspect your own deck for structural damage, cracks, and general weakness.
As decks age, they can frequently become structurally unsound and not safe. Decks with rotting framing members, spongy deck planking, and inadequate lateral bracing can result in structural collapse and serious injuries.
At their 5-year-old mark, decks should be inspected by a licensed contractor who can verify structural integrity and catch problems before they turn into a catastrophe. Decks older than 10 years need a yearly inspection. Custom Deck Creations offers deck inspections throughout  Southeast Michigan, helping you keep your deck safe and sound.
You can also do your own deck inspections at other points in the life of your deck, and you do not need to be a construction expert to do this. All you need is a basic understanding of how decks are built, a few simple tools, and a bit of time, and you can get an idea of just how safe your deck is and whether or not it is time to call for expert assistance.

Understanding How Decks are Built

Decks come in all shapes and sizes, but all decks have the same basic framing components. Here is a summary of how decks are built, and the names and locations of each deck framing component, starting at the bottom:

Common sense can often give you a good idea of how well your deck is aging. If the deck sways or shakes while you walk on it, obviously, this is a bad sign. However, some signs of aging are harder to detect, and a closer look at the structure by a licensed contractor may reveal problems in the making.

Helpful Tools To Inspect Your Own Deck

The only two tools you really need for inspecting your deck are a strong flashlight and an awl. If you don’t have an awl, a small screwdriver will do the same job.

Other helpful tools for deck inspection are:

Inspecting Underneath Your Deck

Start your deck inspection by looking at the posts/piers. Check that the top of each pier is level and that the bottom of the pier extends below ground, or is still attached firmly to a concrete pier.
Concrete footings should sit below the frost line (in Michigan, this is 42″ below grade). Short of digging 4′ deep around each post, dig down a foot or two and inspect the integrity of your posts. Look for rot or for wood that has already rotted away. If you dig down and find that the bottom of any pier is exposed, it needs additional concrete poured under it. Decks in Michigan should not sit on pre-formed concrete “pyramids”, concrete forms that sit on the ground.
Decks built to code are framed underneath with pressure-treated wood or steel. Pressure-treated wood resists rot and lasts much longer than non-treated wood. If the wood is pressure-treated, it may have tiny, regularly spaced perforations all over the surface, and may still have a green or brown hue to it. Take note of whether or not the framing of your deck is pressure-treated. If it is not, the deck will have a much shorter lifespan.
Next, use a level and check if your posts are still plumb (vertically level). Be sure to check two adjacent sides of each post for vertical placement. If the deck is attached to the house, the ledger is an especially important area for inspection. Rotten ledgers are the biggest cause of deck structural failures, allowing the deck to pull away from the house and collapse.

The ledger should be attached to the house with lag screws or hex bolts, so have a close look at the surface of the ledger and determine whether this type of hardware was used. A few nails may have been used to temporarily hold a ledger in place while constructing your deck, but bolts should always be present on your deck’s ledger board. If your ledger is attached only with nails, do not use your deck again until a licensed deck builder inspects your deck. This is a major structural problem with impending catastrophic deck failure.

Examine the ledger carefully for signs of rot, mold, or fungus growth. If any areas look bad, use the awl or slender screwdriver and see how far you can press the tip into the wood. If it goes in easily more than ¼ to ½ inch, this is a sign of rot. Use the awl for checking any other suspicious areas of the deck, as well.

Beams under a deck should not bow, and if they do, this is a sign they are beginning to fail. Bowing beams indicate the beam is inadequately sized for the weight of the deck. Visually examine the bottom edge of beams for signs of bowing. You can also pull a string between the lower corners at each end of the beam to check for bowing.

If your deck is more than three feet off of the ground, there should be lateral bracing at each post/beam connection (except for posts closest to your home for ledgered decks only). Bracing prevents side-to-side shifting of the deck structure in wind or if there are a lot of people on your deck moving around. Check how securely lateral bracing is attached at the posts and beams.

Inspecting the Upper Area of Your Deck

Walk around carefully on the surface of your deck and check for decking which is spongy or poorly attached to the joists. Also, check for the splintering of wood, and use the awl for determining if the decking is rotten.

You may notice nail heads that are sitting up above the decking, try to hammer these back in to prevent cutting your feet on them. It may also be possible for nails or screws to appear flush with the decking but work loose below from a rotten joist. Look out for boards that are warped or splitting as well. It is possible to replace single decking boards, though the matching color will be the hardest part. If any decking moves away from the joist or gives out under your weight when you walk on it, it is overdue for repairs.

As you examine the decking, check how well the deck sealer, paint, or finish is holding up (if your decking is wood). The finish on wood decking is important for preventing rot and splintering of the wood. If you are lucky enough to have composite decking, such as Trex, Timbertech, Azek, or others, your deck does not ever need an application of sealer, paint, or other finish. Woo hoo!

Railings are vital for preventing people and pets from falling off of a deck. Unfortunately, railings are a frequent problem area on older decks. Carefully test the railings and see if they move to any significant degree when you shake them.

Look for missing railing slats/balusters/spindles, and measure the distance between them. There should not be 4″ or more space between them. If slats are spaced farther apart, they pose a hazard for children who can get their head stuck in them, or fall through them. In Michigan, any deck higher than 30″ off the ground is required by law to have railings (for safety purposes, we suggest any deck higher than 9″ off the ground should have railings).

Carefully walk up and down all staircases and test for any give-in stair treads. The riser space at the back of each stair should be completed with a stair riser board, but if not, no gap 4″ or larger should exist.

Stair handrails should be no more than 1 ½ inch in diameter and should be “grip-able”, typically round. Sometimes, deck staircases have 2″ x 4″ cocktail railings (which we love!), and should be complemented with a grip-able round handrail. Examine the hardware attaching handrails to posts. Fasteners should be tight and secure.

Look at the underneath of stairs, checking for rotting stair stringers and gaps between the top of the stringer where it might be pulling away from the deck. Stairs are often installed improperly.

Getting Your Deck Professionally Inspected

Decks can be enjoyed for decades if properly maintained. If you have an older deck, or just moved into a new home, have your deck inspected by a licensed deck builder at the five years mark, and every year once it is over 10 years old.

If you are in the Greater Detroit Metro Area, Custom Deck Creations can provide a professional deck inspection! Contact us today and schedule an appointment.

From design to installation, Custom Deck Creations combines beautiful decks with fair pricing and unparalleled customer service. Our designs stand out, while our install processes exceeds expectations. We are a certified TrexPro Platinum builder. Custom Deck Creations is located in and serves Southeast Michigan.

Worried About a Mess? Here’s How We’ll Handle Clean-up On Your Project

Can I Buy the Materials When Hiring a Deck Builder?

Furniture for Composite Decking: What Won’t Cause Scratches?

Call or Email Today for an Estimate

We serve the following and surrounding areas:

A brief look into the current and expected inflation

Lumber rose +28% locally from November 2021 to January 2022, and is expected for another significant double-digit increase impacting us in June 2022. We’re also anticipating a cost increase  from Trex around that  same time frame. Depending on size and material selection, decks are anticipated to increase in cost an average of $2,000 to $4,000 come June 2022. Custom Deck Creations is currently scheduling projects for April/May, before we feel these cost increases. Schedule a quote with us today to lock in today’s costs.

For a more detailed look into the market, please continue reading:

The lumber market continues to see pressure on the supply side. Canadian truck drivers are protesting COVID vaccine mandates, threatening to disrupt deliveries in Canada and possibly into the US. Fuel prices are also increasing. Overall demand for Southern Yellow Pine (pressure treated lumber used here in MI) remains steady. Mills are not sitting on a lot of inventory. Lead times from mills to dealers are getting extended.

Custom Deck Creations is currently scheduling projects for April & May 2022, before we’re impacted by these increased costs.

Data from Trex distributors nationwide are seeing a steady growth in purchases even through winter.

Lumber will continue to rise in price throughout 2022. We don’t believe we’ll see pre-2022 lumber pricing any time soon.

In 2021 Trex put out 4 separate approximately +10% price increases. We believe more are to be expected in 2022. We do not expect Trex to ever lower their pricing.

Custom Deck Creations does not have an inflationary clause. Lock in today’s lumber and Trex costs with a signed agreement which puts you on our schedule. We will not charge you more even if our costs go up.